Back in 1973 I had my first introduction to a computer. I was in 7th grade and was looking through a list of clubs that we could join. Being the geek that I already was, I saw one that looked interesting - Computer Club. I remember being a little intimidated at the first meeting when it was me and a bunch of upper class-men. We were told that we'd be learning a computer language called APL and we were given a brochure that looked like this. 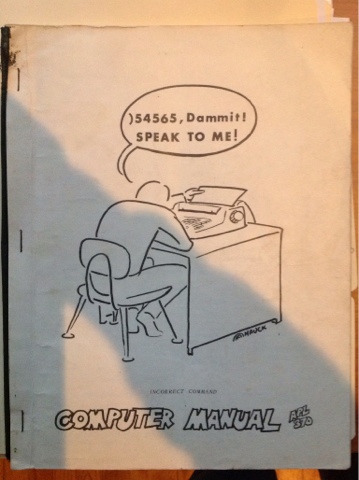 Inside there were a bunch weird of symbols that looked a lot like mathematics. 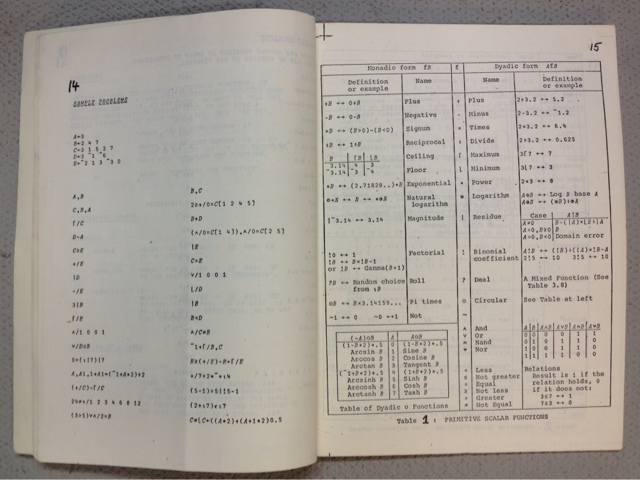 We were brought down to a small office and introduced to the computer. It wasn't actually a computer, but a terminal which connected to a mainframe located some 25 miles away. It was connected to the phone line via an acoustic coupler. The terminal itself was an IBM 2741 that looked something like this. 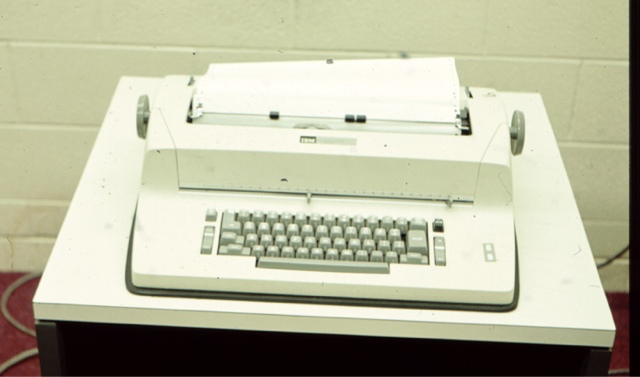 It typed using the famous selectric type ball mechanism at an amazing rate of 10 characters per second (110 baud). The typeball looked like this. 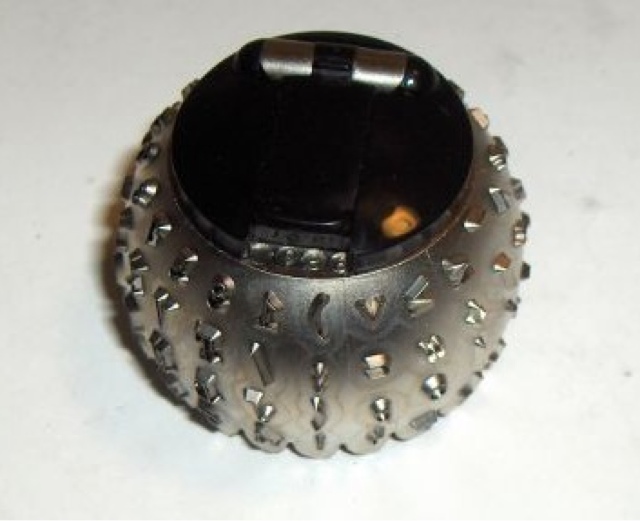 When running at full tilt it would whip this ball around and up and down and make a sound that I can remember to this day - almost like it was trying as hard as it could to express the thousands of calculations going on behind the scenes. The keyboard on the terminal looked like this

... with capital characters printed with unshifted keystrokes and and the funny symbols printed when shifted. During the next months of learning APL and playing with the computer I came to know these symbols very well and the ease with which one could express complex operations with just a very short expression. In fact,  the memory of APL would cause persistent frustration throughout my career when using other computer languages which required lines and lines of code to express the same thing which could be done with a vector here, some transformations there and wallah, the answer.
So that was 40 years ago now. Things have changed so much with computers, but this first experience with APL still intrigued me.  I searched the web to see what was out there about APL. I found many versions of APL that have been developed over the years based on this original, most running on Windows or Linux, some free and some required a paid license. But I also found this, Running APL\360 on OS/360-MVT 21.8F: MVT for APL Version 2.00. A group of people have resurrected the original APL\360 to run on an emulated IBM 360 system running OS/360 and MVT! And all this is available for free and can run on any Windows or Linux system.
I set out to get this system running on my home system. My first attempt was with Version 1.00 of the distribution. With very little experience with MVT, it took quite a few tries, but I eventually got it running.
Here's a shot of the main operator console. 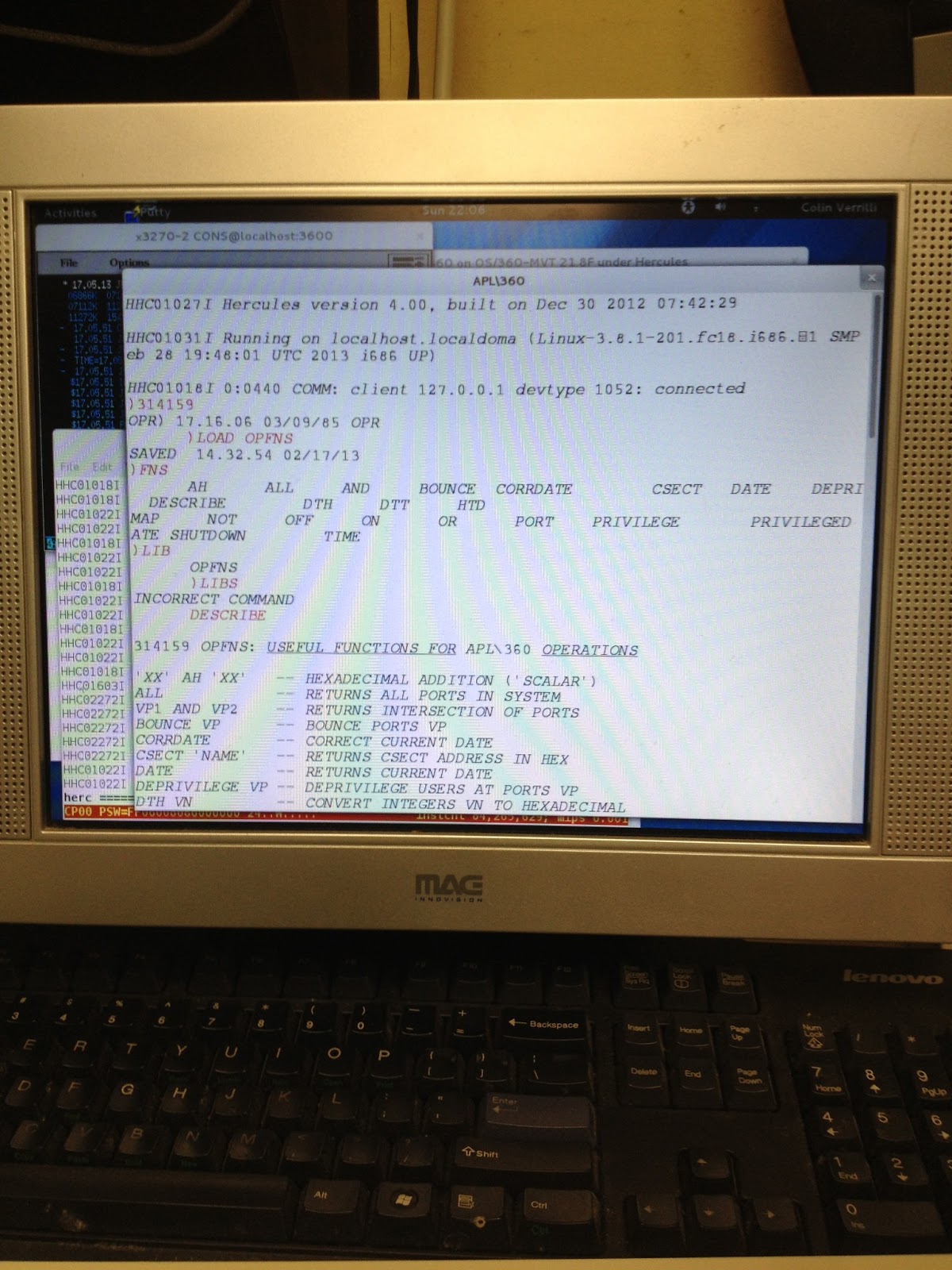 Here's a shot of a user session. 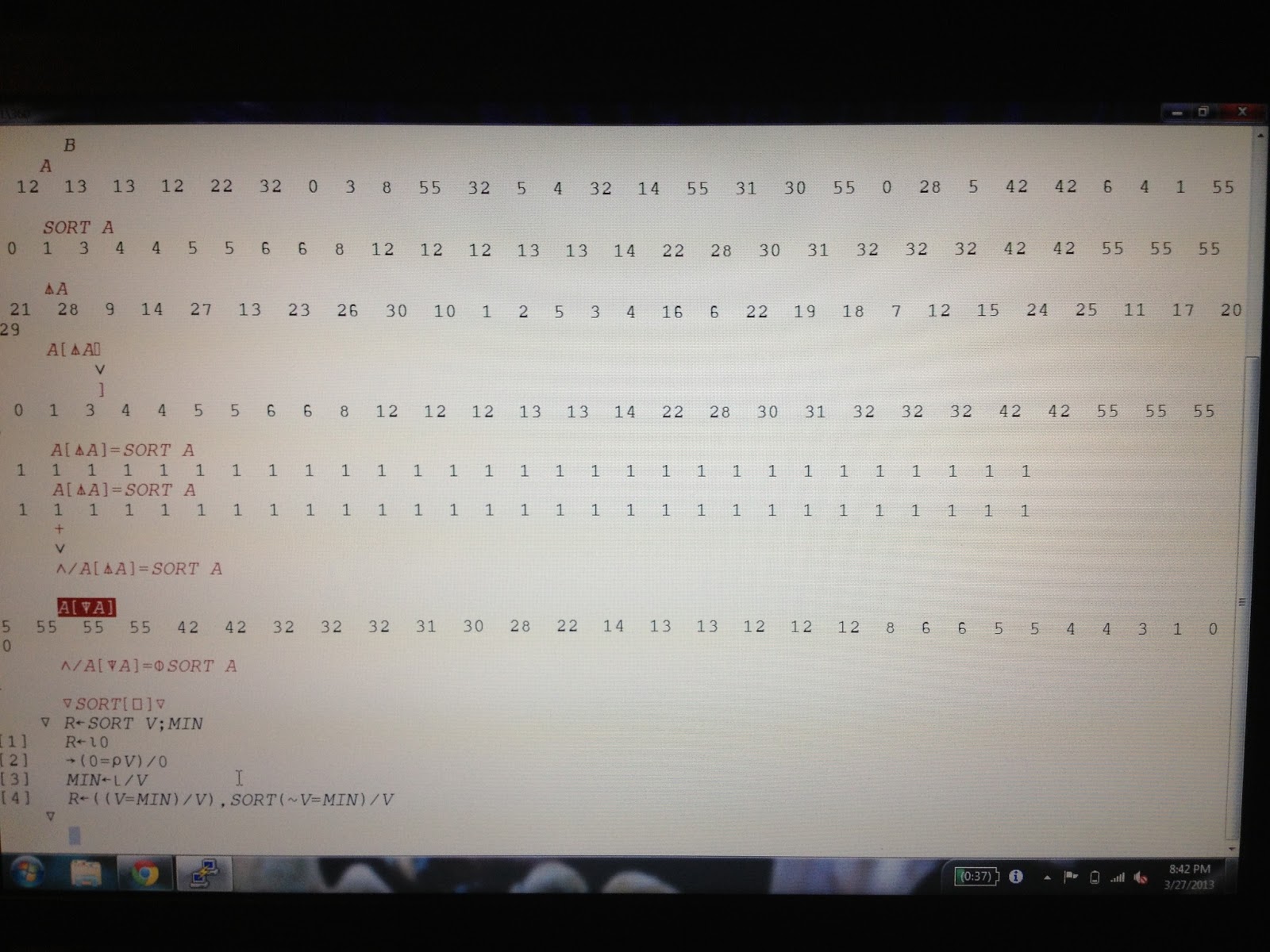 The symbols print very similar to the original APL typeball. All in all, the system is an exact operational replica of the original APL\360 with the exception of the 2741 terminal with its look, feel and noise.
Version 2.00 of the APL on MVS is now available and is much easier to install and run. Give it a try if you're an APL fan, especially if you were introduced to computers with APL\360 like me.